Here is a neat old photograph from October 1941, probably in Comstock or Turtle Lake, Wisconsin. These were my grandmother’s cousins, but she is not in the picture. Her son was just a few months old at the time, so she likely was home caring for him.

We can identify a few people for sure. Renie and Melena and their two youngest Doris and Calvin. They were living in Comstock at the time. We think we see William and Emily LaBlanc and their littlest son Ronnie, who were living in Turtle Lake.

I went to the 1940 census to see where the cousins were living and how old they were at the time. Likely most if not all of William and Emily’s family are in the picture, but we aren’t sure exactly who is who. In 1941, they would have been these ages:

Who are the rest of the people? It is possible the Kuschner’s came from Duluth and are in the picture. Edward was 32 in 1941, Dorothy was 26, Lois was 6 and Lloyd was 4. I don’t think Aime and Rose Desmedt are in the picture, but maybe their daughter Muriel came with the Kuschners? What is the chance that the Temtes or the Moscrops came from Los Angeles?

I imagine war was on their minds. Paris had fallen to the Nazis the previous year and then the Nazis bombed England for months. The attack on Pearl Harbor would happen in December and the US would join WWII. Two of these cousins would lose their lives in the war:

Lastly, I finally tried MyHeritage In Color™ on this picture. It does bring an old photograph to life! 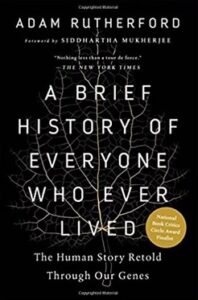 Well, this book isn’t really brief and it isn’t really about everyone, but it is interesting. It starts off great, but does go off on some tangents here and there. A few of my favorite highlights from the book:
1 – We all descend from royalty. Charlemagne is the ancestor of all Europeans alive today. However, we don’t necessarily carry his DNA.
2 – Genetics is a lot more complicated than many of us learned in school with Mendel’s peas.

3 – Race doesn’t exist in genetics.
4 – There is a really great story of how they proved some bones dug up from a parking lot were from Richard III.
5 – The environment affects our DNA and we can pass these changes on to our offspring. In particular, farming has had a big impact on our genes.
Does that interest you? If so, this book might be for you. Get it here: A Brief History of Everyone Who Ever Lived: The Human Story Retold Through Our Genes by Adam Rutherford
One surprise, the author is very negative about genetic genealogy. It is good for people to be warned in this area since there are scams. However, he could have mentioned where there are good tests and how it can be useful, which is mainly to find cousins so that you can collaborate on your genealogy research. If you want to be an educated consumer, read: Which DNA Test is Best?

In this time of COVID-19, I have the 1918 Flu Pandemic on my mind. How did it affect my ancestors?

First, I looked at death dates for my direct ancestors and found two candidates.

Relatedly, here is a nice post from someone whose father was in the Army suffering from the flu and had two ancestors die in TN.

Even though I don’t have any direct evidence of how the 1918 flu affected my ancestors, it surely did change their lives. At the time, there were closures and lots of people wearing masks. It is interesting to see the pictures we have from that time and learn about what it was like . . . .

I found myself listening to West of the Moon by Margi Preus on a recent road trip and I really liked it. It is a good story and it won a Minnesota Book Award in 2015. She draws on Norwegian folk tales, so I felt I was getting in touch with my Norwegian heritage.
While this book is fiction, she was inspired to write it by her great-great-grandmother’s diary, where she describes coming to America in 1851. In particular, there was a girl alone on the ship in the diary which inspired Preus to write this story.
I have always been interested in emmigrant stories. What is that like to leave everything you know and endure a difficult journey in the hopes of making a better life somewhere new?
The author did a bunch of historical research and yet the book still has a timeless, fairy-tale quality. It is not just a children’s book either! There are some good philosophical questions in there as well.
Wait a minute, didn’t my Norwegian great-great-grandmother come to America as well? Did she come alone like the girl who inspired the story? Was she hoping to find her father like the girl in the story?

Here is what we know so far . . .
We find my great-great-grandmother, Anna, in an emigration database leaving Bergen, Norway 8 Apr 1885. I have not yet been able to document her complete journey through ships logs or border crossings. She has a lot of name variations.
Her father was already in America, but we don’t know that they kept in touch. She had been born out of wedlock, so she probably was looking forward to a fresh start. Her brother Amond emigrated later in 1905.
She got married to Lars Fjerstad in Minnesota on 22 Nov 1889. He had emigrated the year after Anna. I imagine they met here since they were from different Norwegian towns. They went on to have six children and 22 grandchildren.
They did have relatives around from Lars’ side of the family. His three siblings also came to America in 1892 and 1893. His mother came in 1893 after her husband died and we see her living with Lars and Anna at the time of the 1895 census. Brother Ole was living with Lars and Anna at the time of the 1900 census.

Have you been attracted to those glossy ads to find out who you are by doing a genealogy DNA test?
Roberta Estes wrote this interesting article where she figured out her estimated ethnicity percentages from her traditional genealogy research and then compared them to results from several genetic genealogy vendors: Concepts – Calculating Ethnicity Percentages.
I was inspired to play with this idea myself, though I simplified things a bit. For example, I have only used one testing company. I took my 16 great-great grandparents and what I know about where they were born and their heritage (based on decades of traditional genealogy research) and estimated ethnicity percentages. I tallied my parents separately to make a clean comparison since I tested them separately and put them on the left side of the table. Then I put the ethnicity percentages from the Family Finder test from FamilyTreeDNA in to my table on the right side.

What Came Through as Expected (or close to expected)
Mom is 50% Finnish through both methods.
Family Finder reports 44% West & Central Europe compared to my estimate of 50% when I combine French, German and Dutch for Mom.
For Dad, we see Family Finder’s 75% British Isles matching with my 75% for English.
What was Unexpected
1 – Family Finder’s Scandinavian at 8% seems very low. (And is funny since Estes had a strangely high Scandinavian percentage.) Relatedly, the Eastern European at 16% seems too high.
My 25% Norwegian estimate is pretty solid. I have connected with a cousin in Norway who has done research. The ancestors seem quite Norwegian at least back to my great-great-great-great-great grandparents. And 16% would be roughly 1 great-grandparent or two great-great-grandparents who were half East European or a bunch of ancestors further back. There are no family stories about someone coming from East Europe.
2 – Family Finder reports 3% Southeast Europe, which is news to me, but Estes talks about how Germans tend to be 30% Mediterranean, so the 3% Southeast Europe here is plausible.
3 – The trace amounts could be noise or something from very far back. We may never know.
As Estes says:

“The science just isn’t there yet for answers at the level most people seek.”
“Ethnicity estimates are not a short cut to or a replacement for discovering who you are based on sound genealogical research.”

Hooray! The second edition of A Finnish Family in Northern Minnesota is available with lots of new information.
Read about William and Katri here!
Please note: a PDF is available for printing on the book home page, but the links don’t come through that way. Use this version to link to the resources that are cited in the book.