Have you been attracted to those glossy ads to find out who you are by doing a genealogy DNA test?

Roberta Estes wrote this interesting article where she figured out her estimated ethnicity percentages from her traditional genealogy research and then compared them to results from several genetic genealogy vendors: Concepts – Calculating Ethnicity Percentages.

I was inspired to play with this idea myself, though I simplified things a bit. For example, I have only used one testing company. I took my 16 great-great grandparents and what I know about where they were born and their heritage (based on decades of traditional genealogy research) and estimated ethnicity percentages. I tallied my parents separately to make a clean comparison since I tested them separately and put them on the left side of the table. Then I put the ethnicity percentages from the Family Finder test from FamilyTreeDNA in to my table on the right side. 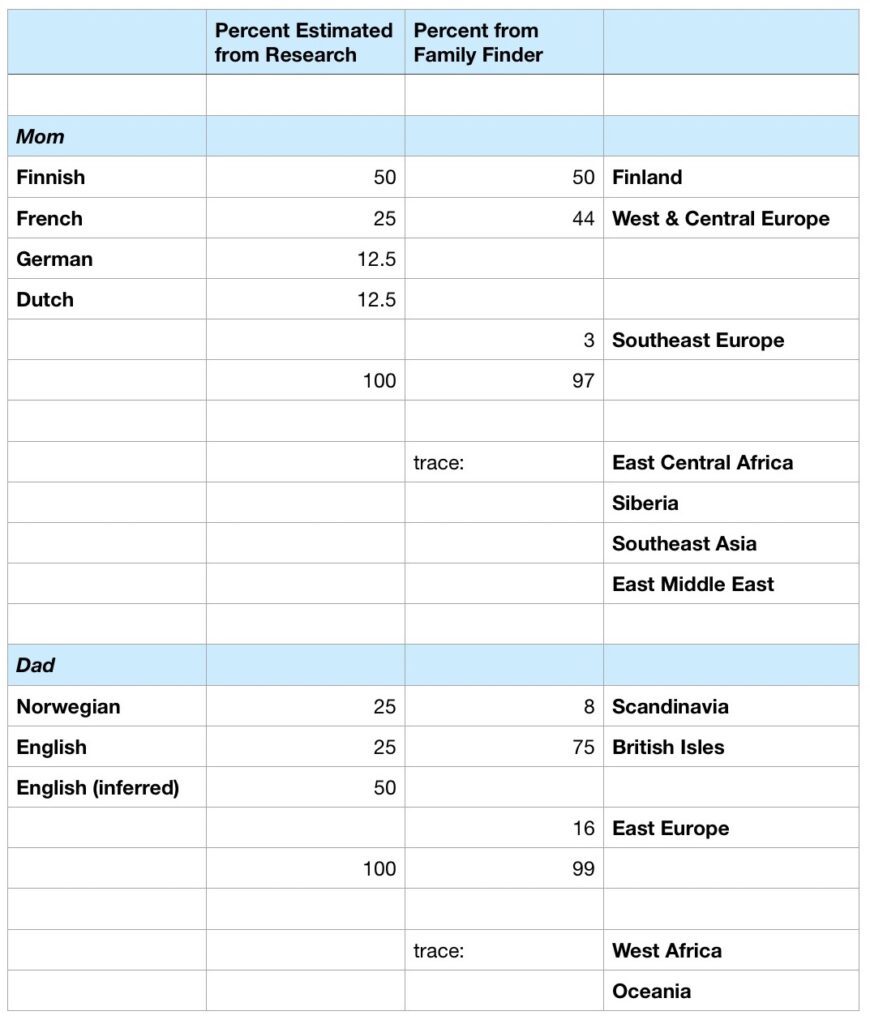 What Came Through as Expected (or close to expected)

“The science just isn’t there yet for answers at the level most people seek.”
“Ethnicity estimates are not a short cut to or a replacement for discovering who you are based on sound genealogical research.”

This discovery is a great example of how genetic genealogy can help with our research. I had done traditional paper research on my maternal line back to Marie Louise Desmarais, born in 1716, using birth certificates, parish registers and the Loiselle and Drouin marriage indexes. The maternal line is your mother’s mother’s mother’s line and can be difficult to research because of all those name changes.

A dna test can help you get in touch with cousins who have information you don’t have and that is what happened here. Taking the mtDNA test, I found others with the W3a2 haplogroup and they had done the research between Marie Marguerie and Marie Louise’s daughter, so we overlapped two generations. I love it when the paper research and dna results sync up!

I am also intrigued that Marie’s daughter was named Gertrude, which is also my grandmother’s name. I think this is a coincidence. I don’t believe my great-grandparents knew about our family history. I still like it though! Gertrude, back in early Quebec, lived to be 78. Her husband also knew several languages of the first nations tribes and was a fur trader.

Genetic genealogy, especially mtDNA, can also give you an idea about your ancient ancestors . . .

Have you heard of the book The Seven Daughters of Eve by Bryan Sykes?

First, the bad news . . . if you find you are a member of the W haplogroup and you were excited to learn which of Eve’s seven daughters is your ancestor, prepare for disappointment. There is a low percent of Haplogroup W in the world and it is not one of the seven daughters of Eve.
However, there is some information available for the W line and here is a rough sketch of the key points from Mark Wade’s current hypothesis for the W timeline:

The original website is gone, but you can see Mark Wade’s work in the Internet Archive:

Funny story . . . I discovered I have a Mayflower ancestor last Thanksgiving. Yes, on the holiday where we think about the Pilgrims and the Indians, I discovered I have a Pilgrim ancestor. I sure wish I had known when I visited the Plymouth area years ago! I have to admit I am kind of excited about this discovery. There are lots of descendants of the approximately 217,000 Revolutionary War soldiers, but there were only 102 Mayflower passengers and about half of them died the first winter.

While checking sources, I discovered another Pilgrim ancestor! A married couple, Samuel Washburn and Abigail Leonard each had a Mayflower ancestor. Here is what we know about the ancestors of Samuel Washburn and Abigail Leonard. Some dates are approximate and calculated. Most of this information is from the Mayflower Families through Five Generations volumes 12 and 15.

I will go into more detail on the Washburns in an upcoming post, but for now let’s talk a bit about the Mayflower passengers, especially Francis Cooke and James Chilton, both signers of the Mayflower Compact.

There is some great description about the ship and the journey here. Over two months on a small ship under bad conditions! They got off course from where they were supposed to settle and there was some disagreement between the Puritans and non-separatist Pilgrims.
They wrote the Mayflower Compact to govern themselves and this was the first written framework of government established in what is now the United States. Many people believe the Mayflower Compact influenced the Declaration of Independence and the U.S. Constitution.

As you may have seen from our earlier Laitala post, we had a mystery about William Laitala. Who were his parents? We had a few bits of information, but nothing that tied everything together:

So my clever and persistent mother spent some quality time with the Finnish parish books, searching for a later record of the family. She looked at all the parishes surrounding Haapavesi too in case the family moved around. Nothing. (She had previously found records in the Hiski database showing Juho and Anna Laitala as godparents several times in the parish of Vihanti, between 1885-1895.)

Then she found the cousin had a notation saying that Sakri Juntilla, Alina’s husband, came to Chisholm to meet William Laitala, brother-in-law. Where did this come from?

It took a bit of looking around and then – Aha! The Ellis Island records!

So now we feel confident that this all ties together. William and Alina were siblings. We know their parents names. William was born in Jan 1878 in Haapavesi, Finland. (There are discrepancies on the exact date, but we’re sure of January.) Of his older siblings, we think only Abel and Abraim came to Minnesota, the others remained in Finland. We also think there were two younger brothers, Matti and Antti, who also came to Minnesota. And, of course, Alina Laitala Juntilla, the youngest sister, came to Chisholm with her daughter to join her husband.

So I couldn’t stop there! Then I stitched together these ancestors for William from the Hiski database and the parish pages. This could have errors, but it is a good start for further research.

Look at all the interesting things going on with the Finnish names!:

My clever and persistent mother recently decided to tackle the death of Lars Fjerstad. There was a family story about how he was working at a neighbor’s house and they hadn’t seen smoke over there in a couple days and so they went over and he was dead. We think maybe he died in Minnesota, but was buried in South Dakota? And we haven’t been able to find a death certificate.

She insists on documentation. She wants proof, so she conducted some extensive research. She looked for proof of death. She looked for proof of life. Lars and Anna moved around a bit, so she looked in several counties on both sides of the border between Minnesota and South Dakota. She explored civil and religious records. Some she had to go through page by page. Some were in Norwegian. (No, she doesn’t know Norwegian, but you can follow the pattern of church records in a foreign language if you put your mind to it.)

Also complicating matters, there is an error in the South Dakota Cemetery Index. The entry for Lasse J. Fjerestad has the death date as 1614. Oops. And in case you were thinking there was another Lasse J. Fjerestad, no, the index only goes back to 1831. 1614 is definitely a typo.

My clever and persistent mother had just about given up. She decided she would check one last time. And voila! A recently posted image popped up on FindaGrave.com! Thank you Sherbie58 for taking these pictures! This is our guy:

Also interesting, there are two other Fjerestads in the Sterling cemetery. Two infants that appear to be in the same grave: Henry and Esther. Henry 1901-1902 was Lars’ son. But Esther 1895-1896 is another mystery to solve! Who did she belong to?

My clever and persistent mother is working on the Laitala part of the family. It sounds like she is finding some cool stuff that we will be able to share soon.

And I have just read Finns in Minnesota by Arnold R. Alanen. It is a quick read at 112 pages & it has lots of fun pictures. I especially liked all the Finnish terms & phrases included, of course Sisu, we have all heard that one before. How about “Oma tupa, oma lupa,” which he translated as “one’s home, one’s way.” (Which differs slightly from Edgar’s translation of “One’s own cabin, one’s own freedom” in Finnish Proverbs in Minnesota.)

Alanen also highlights The Finnish Cookbook by Beatrice Ojakangas – I had to check that one out! She remembered yummy food from her Finnish grandparents & lived in Finland for a year. Her cookbook came out in 1964 & it is more than just recipes. She has an introduction including personality, language & a bit of history. The recipes are put into historical & cultural context & adapted to the American kitchen. Both Finnish & English names appear. There is lots of emphasis on items for the coffee table! Hmmm, I have got to get my hands on some sour rye bread!

In addition, Alanen mentions Bobby Aro & he sounded familiar, so I had to go see what I could find . . .

And here is something fun, a little more recent & actually in Finnish!

Also, my head is full of images of historic Chisholm. We do not usually think of northern Minnesota as the Old West, but Chisholm was that same sort of rough & tumble boomtown with lots of young single Finnish men, working in the mines and lumber camps, living in boarding houses. And then there was lots of drinking & carousing. What an interesting time & place!

There are some great old images in Hans R. Wasastjerna’s History of the Finns in Minnesota – don’t you love these?!