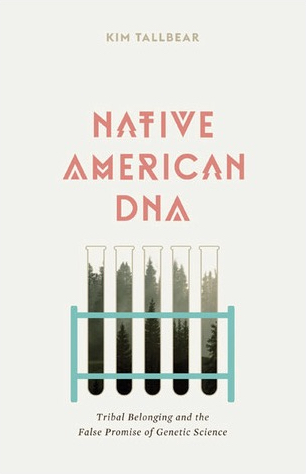 This is an interesting book. As the marketing blurb says, “Who is a Native American? And who gets to decide?”

Have you seen ads for genealogy dna tests so that you can prove your Indian ancestry? It is a lot more complicated than they lead us to believe.

The author places our current interest in genetic genealogy in context, reminding us that our history includes racism, colonialism and eugenics.

Most alarming, samples have been collected and used for things without consent. This raises questions such as who owns and profits from the samples?
The author is a professor and is enrolled Sisseton-Wahpeton Oyate. She also is descended from the Cheyenne & Arapaho Tribes of Oklahoma.

The author did an interview after the book was published: There is no DNA test to prove you’re Native American.

“Kim Tallbear warns that genetic tests are a blunt tool. She tells Linda Geddes why tribal identity is not just a matter of blood ties.”

Before DNA testing, people did traditional paper research. To be a tribe member, you might need to prove as much as one-quarter blood quantum. (That means one grandparent was a tribe member or two ancestors further back.)

And it isn’t just about biology or blood. It is about culture and citizenship. It is complicated. As Tallbear says:

“I think we need to stop conflating the concept of a tribe with a racial group. I and many of my relatives have non-native fathers, yet we have a strong sense of being Dakota because we were raised within an extended Dakota kin group. We have a particular cultural identity, based in a land that we hold to be sacred. That’s what gives our lives meaning. It’s what makes us who we are.”

I have been interested in this topic because, like a lot of us, I have a family story that we have an Indian ancestor. In my case, it was quite specific. Supposedly, my great-great-great grandfather, Peter LeClair, was a French Canadian fur trapper and he married an Indian maiden. It is the whole reason I started doing genealogy research decades ago! I wanted to know more about that.

And yet, it doesn’t seem to be true. The parish registers and other sources document these ancestors of mine back to the early settlers of Quebec, but there is no sign of an Indian. I still wonder . . . who started this story? And why?